Hello all friends of Art.

… Final closing of this Season means: the conservation of prim based 3D art is done. The time capsule VULCANICUS closed. It´s time to thank the contributors. So it is a happy time and a chance to see it all on January 30th.

We made it! And I can start to work on a book about it! Maybe I call it ‘Simulacron-1, a travel into artinformatics’ [Simulacron-1, eine Reise in die Kunstinformatik]. About 50 artists will be mentioned. Each with 1 – 4 pictures. Three artists moved ‘over the boundaries of VULCANICUS’: Gem Preiz, Navah Dreams and JadeYu Fhang. They created a full word, a full region, a full sim. You  will see it with your own eyes by visiting it on Thursday. This brings me to my next idea of a virtual biennial where each contributor gets a full sim to create a full world. But this is not the place to talk about this.

I never made a kickstarter project for myself. I was always ‘a baker’ giving money to others. Last year I co-financed: A photobook of Burning Man, Wall on Wall, Son of Nor. For Son of Nor I developed a NCP [Non Playing Character named ‘Ervare’] and added an idea to the game: ‘The Gate of Nor‘. Ervare points out from the game to an opensimulator world of art. It will come on the market in summer 2014. In Wall on Wall we tested if it is realy working to stear a game without mouse and keyboard, just by an headset scanning human brain waves.

For a kickstarter one has to give some profile information. Here it comes:

Some of you know I left ‘hard business’ behind and work now ‘for the arts’ – Digital Art of course. In other areas of art I am not more qualified as many others. To combine art and technology for now over 40 years gives me a chance to make some technological breakthroughs  ‘visual’ that have never been explored so far. I use for it the term Hypergrid.Network. With the help of some friends there is reasonable progress. VULCANICUS is a project I am very happy about how it went und finally got to run as a ‘time capsule of 3D prim based art’. Thank you all. One helper I have to name foremost: Daniel, 25 years old, who studied in my lab to become an software engineer six years ago. Now he completes his BSc at the University of Applied Sciences in Berlin. Luckily this study runs on a shared time concept so I will have access on him for one more year.

The next research project  with Daniel, starting in July, will extend the focus to user [public] interaction systems, web-integration and from the technological part it will also focus ‘robust services’. The new focus will bring interactivity which we have already developend a little, calling it ‘liquid vote‘,  to a new level. Also I am happy to have more time to write some short stories where art and avatars are in the middle.  I may do again some ‘theatre’ performances as I did in the past as there are intelligent bots coming up in opensimulator … when anyone wants to take part and play a role, send me a note. Art Blue in SL or in Metropolis is an easy way.

The book will have also the links where one can download the software needed to run a ‘self made world’ and show how to set ‘a hyperlink to an open grid’. VULCANICUS is made this way. When you visit VULCANICUS via Metropolis you enter ‘the art grid VULCANICUS’. For the user it looks like staying all the time in the Metropolis grid.

As the book will  show some developments in Digital Art over the last decade I like to add a link to a school project, called Primexplorer where kids aged 9 to 14 used opensimulator. It is quite amazing what happens when art moves in. Some parents have been quite happy to see that their son is no longer shooting aliens or playing ‘World of Tanks’ all day long 🙂

I want to keep what you will see as a secret for a little while. But as you are now here I will give you some ideas:

Michio Funaki is the name of a cook at the ‘Moon Restaurant’ in the novel LIMIT. Zaphod Beeblebrox is a charakter in Douglas Adams books ‘The Hitchhiker’s Guide to the Galaxy’ and ‘The Restaurant at the End of the Universe’ I like much – so much that when you Google for ‘TRATEOTU’ you will find me and a restaurant in Saxony – I designed the website some years ago. Next tip: SR Hadden. Of course it must be Science Fiction again. You find him in a second. He is the mentor of a dreamer: Judie Foster is playing the dreamer … you know the end of this movie: the video tape running and nothing on it to see, just to believe the time counter. 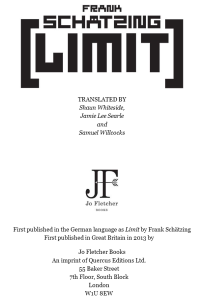 In case you got a message:

I pay for your genius

then try it out and discovered the message in the artwork at http://ireport.cnn.com/docs/DOC-1077619

Today I was about to login to Second Life to look after my art friend JadeYu Fhang as she had to suffer yesterday on ‘GRIPPE’, as influenza is called in French. She had fever but the exhibition in RIFT HORIZON opened and the artist was present – thank you JadeYu!

The performance of the ‘walking skull’ was postponed of course, so JadeYu could head to bed again fast. Get well soon JadeYu! I know JadeYu Fhang is often in SL working on preparing art installations on her land. There, at Song Bird, I met her before she transferred her famous artwork ‘Roots and war’ to opengrid Metropolis at RIFT HORIZON.

But I could not log in! My good old prim based viewer that served me well for many years shouted back to me: “You must download this update to use Second Life”.  You may have heard of the system Second Life where you walk in a 3D world with a digital virtualization of your so called yourself, named ‘Avatar’.

I decided to Google on what the new update will bring me in ‘BBIWY’ matters. So I said: “is second life watched by nsa” and got a full hit back. This is the 1st ranked Goggle hit: “… according to Snowden documents, the U.S. has conducted spy operations in Second Life …”. The 2nd ranked Google hit brings a headline by ‘The Sydney Morning Herald’: NSA spies infiltrate World of Warcraft, Second Life online games (December 10, 2013).

Now I have proof of a prediction I published in 2011: ‘viewer software will enforce that you have to accept whatever the software developers want to do with you – or you are dead’. My Avatar may rest in peace. Sorry JadeYu Fhang. I have to wait in opengrid for your return and stay out of SL – no Second Life for me this way!

Hm … hm …. I cant give up to meet my old art friends. What to do? Luckily my birthday will be very soon. Shall I rent a PC in Romania or Ukraine and let my data run hosted there? I have an offer for 80 Euro a month – a highspeed noname rack manufactured by some Anonymous. That’s much money there in such countries.

Or shall I put all my money together and travel to the island of Tonga I always dreamt to travel once and meet King Tupou VI the owner of the great top level domain ‘.TO’ I have bought some years ago? Then I can setup my own bit currency and welcome the new version 3.6.13.284995

Who wants to travel with me? I need a sponsor!

And this I got: 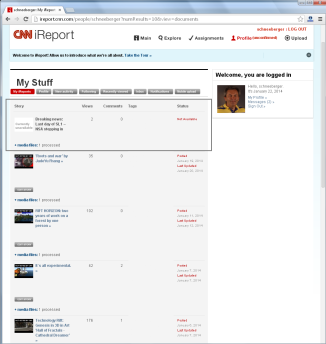 Just click on the picture to enlarge and you see: Story currently not available. Even not to edit!

In case you liked my report then click on the shortlink http://is.gd/icnnblocked, an ethical shortlink service, provided by MEMSET. This gives me a simple non-personal statistic on your click. Here comes an example, for is.gd/primexplorer: 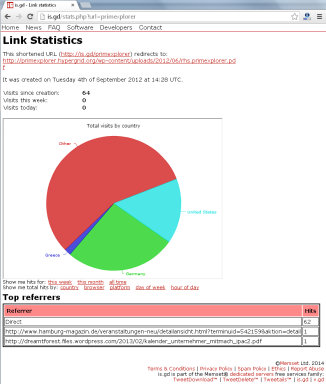 And the best for you, comes here: Enter after you clicked the link http://is.gd/icnnblocked now http://is.gd/icnnblocked- and you see the stat data the same way as I see it. It is just the tiny ‘–‘ you have to add at the shortlink to get the stats. Only one click per IP address will be counted, so no double click will generate stats!

In case you have not read the announcement of ‘Roots and war’ in iCNN, then it is time to do now. To explore this artwork is the mission of the skeleton you see here.

The ladder to the installation made by JadeYu Fhang brings us today to a technology RIFT. The longest ladder ever made? Yes! But why the Avatar needs two heads and three arms for this? Is it a homage on a reborn Zaphod Beeblebrox [see cultural references there] reated by Douglas Adams you may ask as you know the artist behind the skeleton Art Blue? Hm … can be …

Is it the skin / attachment problem on different simulator versions? Yes! It is a reflexion of both – as all this happened to Zaphod Beeblebrox by a time machine. And such strange effects happend to use a few days ago: ‘It´s all experimental‘

But why has the artist JadeYu Fhang made two globes, one nearly empty, just roots connecting them?

It will be now on you to climb up the ladder to find your way to see the art work ‘Roots and war’ with your eyes. On Tuesday 21, 2014, 22.00 CET [= 1 PM PDT] at opengrid Metropolis. Watch the Skeleton climbing up, watch for more when the skeleton has reached the end of the ladder. Will there again Raymond Kurzweil wait to hand over the Graviton boots to create a Singularity? You dont remember? You have not been there on November 28, 2013 at SIM Claressa [in SL]? Here comes a video ‘The cathedral of fractals by Gem Preiz‘ made by Wizardoz Chrome. You see the daVinci machine and the Graviton boots to create a RIFT within SL: a creation of a carbon life form.

Dont be scared the ladder looks much more solid in daylight 🙂

Why not telling a story starting from the end and going backwards?

Of course you are curious what the blue advert means “Get your skeleton for free today”. Was it on iCNN? Is it a fake? Yes and No. Just click at the picture and you see what you get. Yes! A skeleton Avatar, full perm. This means you can copy, modify and transfer it. So it is a treasure you will get … when and where? For this you need to read the very next RIFT_HORIZON

But why you will get this gift? There is a reason as ‘It´s all experimental.‘ Inside this

iReport you will find it, hidden. And we all know a skeleton cant loose clothes! And the article you may need to read to get the full message follows now: Technology Rift:

Genesis in 3D in Art ‘Hall of Fractals – Cathedral Dreamer‘. Now you know why the skeleton was made for ‘you’.